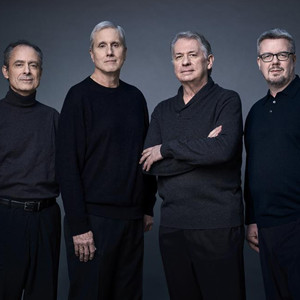 The Emerson String Quartet stands apart in the history of string quartets with over four decades of an unparalleled list of achievements: more than thirty acclaimed recordings, nine Grammys® (including two for Best Classical Album), three Gramophone Awards, the Avery Fisher Prize, Musical America’s "Ensemble of the Year", and collaborations with many of the greatest artists of our time. With a repertoire that spans three centuries of chamber music, the Emerson also looks towards the future by collaborating with today’s most esteemed composers and premiering new works, thus proving their commitment to keeping the art form of the string quartet alive and more relevant than ever.

"... with musicians like this there must be some hope for humanity." — The Times (London)

"The performances were everything we have come to expect from this superb ensemble:  technically resourceful, musically insightful, cohesive, full of character and always interesting." — The New York Times

Formed in 1976 and based in New York City, the Emerson was one of the first quartets whose violinists alternated in the first chair position.  The quartet, which took its name from the American poet and philosopher Ralph Waldo Emerson, balances busy performing careers with a commitment to teaching and serves as Quartet-in-Residence at Stony Brook University.  In 2013, cellist Paul Watkins, a distinguished soloist, award-wining conductor, and devoted chamber musician, joined the original members of the Emerson Quartet. The reconfigured group has been praised by critics and fans alike around the world. In spring 2016, full-time Stony Brook faculty members Philip Setzer and Lawrence Dutton received the honor of Distinguished Professor, and part-time faculty members Eugene Drucker and Paul Watkins were awarded the title of Honorary Distinguished Professor.