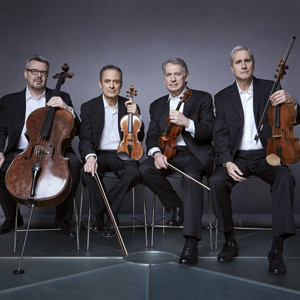 ONE OF THE TWO FOUNDING MEMBERS OF THE EMERSON STRING QUARTET, VIOLINIST EUGENE DRUCKER, JOINS CLASSICAL POST FOR A Q&A TO DISCUSS REHEARSALS DURING QUARANTINE, REINTERPRETING STANDARD WORKS OVER THE YEARS, AND HIS OWN CREATIVE WRITING PROJECTS.

The Emerson String Quartet has maintained its status as one of the world’s premier chamber music ensembles for more than four decades. “With musicians like this,” wrote a reviewer for The Times (London), “there must be some hope for humanity.” The Quartet has made more than 30 acclaimed recordings, and has been honored with nine GRAMMYs® (including two for Best Classical Album), three Gramophone Awards, the Avery Fisher Prize, and Musical America’s “Ensemble of the Year” award.

Violinist Eugene Drucker is also an active soloist. He has appeared with the orchestras of Montreal, Brussels, Antwerp, Liege, Hartford, Richmond, Omaha, Jerusalem and the Rhineland-Palatinate, as well as with the American Symphony Orchestra, Aspen Chamber Symphony and Las Vegas Philharmonic. Mr. Drucker has recorded the complete unaccompanied works of Bach, reissued by Parnassus Records, and the complete sonatas and duos of Bartók for Biddulph Recordings. His novel, The Savior, was published by Simon & Schuster in 2007 and has appeared in a German translation called Wintersonate, published by Osburg Verlag in Berlin. Mr. Drucker's compositional debut, a setting of four sonnets by Shakespeare, was premiered in 2008 by baritone Andrew Nolen and the Escher String Quartet at Stony Brook, where the Emerson is quartet-in-residence; the songs have appeared as part of a 2-CD release called "Stony Brook Soundings," issued by Bridge Recordings in the spring of 2010. In 2017, At The Edge of The Cliff, a song cycle based on five poems by Denise Levertov, was performed in New York City and Stony Brook. Eugene Drucker’s string quartet suite, Series of Twelve, commissioned by the New Music for Strings Festival through New Music USA, with generous support from Justus and Elizabeth Schlicting, was premiered in 2018 in Copenhagen and Reykjavik.

Eugene Drucker: We haven’t had too much contact during the past couple of weeks. Before that, there was a flurry of emails, texts and phone calls between us and various management representatives regarding the cancellation of our Europe tour, scheduled from March 11-22, as one presenter after another (but not all) canceled before we would have left. More recently, there’s been communication about rescheduling several of this season’s lost concerts for next season, as well as some back-and-forth about the fulfillment of our teaching responsibilities for the rest of the semester at Stony Brook University.

ED: Yes, our interpretations of many works have changed, for various reasons. First, it’s possible and often desirable to take faster tempos in a recording, when the microphones are placed close to the instruments so that every detail can be captured clearly. In a large concert hall, particularly one with resonant acoustics, broader tempos are needed in order to project the musical ideas clearly at a greater distance. Also, as living, breathing human beings, we’re constantly changing, so the passage of time as well as events in our personal lives would definitely have an effect on us in ways that we might not be able to specify in musical detail. Finally, having had a change of cellist in 2013, our group sound has changed somewhat. David Finckel and Paul Watkins are both great cellists,  with very different sound colors and musical personalities. So, the entire quartet sound has been transformed as a result, as well as the pacing of our performances to some extent. It’s hard for me to describe the changes objectively, so I’ll leave it to listeners to evaluate our work!

CP: CAN YOU TELL US A LITTLE BIT ABOUT THE EMERSON STRING QUARTET’S PROJECT THE BLACK MONK?

ED: The Black Monk, co-created by the director James Glossman and my Emerson colleague Philip Setzer, is a play with music, involving seven actors, most of them playing multiple roles. It is about Shostakovich’s struggle with the ghost of Stalin and his unrealized desire to base an opera on the Chekhov story of the same name. Some of the thematic ideas that he sketched for the opera found their way into the Fourteenth and Fifteenth String Quartets.

CP: HOW HAS THE EMERSON QUARTET’S RELATIONSHIP TO THE MUSIC OF SHOSTAKOVICH CHANGED OVER TIME FROM RECORDING HIS COMPLETE QUARTETS IN 2000 TO THE CREATION OF THE BLACK MONK?

ED: The considerations I’ve outlined in my previous answer would apply to our interpretations of Shostakovich as well as Beethoven. In the same year that our 5-CD Shostakovich recording came out, we performed a complete Shostakovich cycle in five concerts at Lincoln Center, and were involved in our first staged dramatic presentation: The Noise of Time, with the British company Complicité and the brilliant director Simon McBurney. It’s probably no coincidence that both of our theatrical projects were based on the life and times of Shostakovich, whose music has so many layers of irony and whose fraught relationship with the highest echelons of the power structure of the Soviet Union provides a great deal of dramatic potential.

CP: IN ADDITION TO BEING A VIOLINIST, YOU ARE ALSO A COMPOSER AND AUTHOR OF THE SAVIOR: A NOVEL (2008). ARE THERE ANY PARALLELS IN THE CREATIVE PROCESS BETWEEN COMPOSING MUSIC AND WRITING A NOVEL FOR YOU? ARE THERE CORRELATIONS BETWEEN PERFORMING, COMPOSING, AND WRITING?

ED: Both composing music and writing fiction involve creating something that was not there before, even though it may be based on various traditions. There’s a potential satisfaction in honing an idea from the original, probably raw material into something more developed and, finally, more or less complete. I don’t have a large output in either  field because I work sporadically and slowly; things don’t usually flow that easily for me. I’ve done my best composing when inspired by great literature, like Shakespeare, whose characters and verse have given me specific motivic ideas that I could subsequently transform for use even in non-vocal, non-representational music. One can be creative when performing chamber music masterpieces, of course, but it’s mostly interpretive work, since there are established criteria according to which great music should be played. One hopes to express one’s individual temperament, but there’s a performance tradition to continue or to depart from; the music is already there, and the interpreter’s role is to serve it.

CP: HAS QUARANTINE BEEN A TIME FOR YOU TO TURN TO YOUR COMPOSING AND WRITING PROJECTS? IF SO, WHAT ARE YOU CURRENTLY WORKING ON?

ED: I wish I could say it’s been a highly organized and productive time for me, but it has often been difficult to focus on either practicing the violin or creative work without immediate goals. I completed a second novel several months ago, and have been trying to get it published. More recently I’ve begun what might turn into a third novel, or maybe a novella, if I can get past the first 14 pages. In 2017 I set five poems by the great American poet Denise Levertov (a personal friend of mine during the decade before her death in 1997) for soprano and string quartet. Last September I set another one of her poems for soprano, violin and cello, and in the past few days have been re-reading various volumes of her work, looking for potential material for further settings.