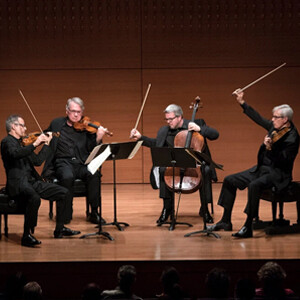 Celebrated String Quartet Will Disband, Ending 47-Year Run
The Emerson String Quartet, known for its energy and nuance, will retire in 2023 so its members can pursue solo projects.

The Emerson String Quartet, a renowned chamber ensemble known for its lively, nuanced playing, announced on Thursday that it would disband in 2023, after nearly a half-century.

The quartet’s members said they had decided it was time to move on so they could focus on teaching and solo work.

“It’s not in any way that we’re tired of playing the music or being with each other,” Philip Setzer, 70, a violinist and a founding member of the quartet, said in an interview. “At a certain point you think, ‘Let’s end when we’re all really playing our best and the group sounds good.’ And when people are going to be surprised we’re stopping and not, ‘Oh, you’re still playing?’ ”

The quartet, which began as a student group at the Juilliard School before turning professional in 1976, is one of best-known in the world. Its members have made more than 30 recordings together and have won nine Grammy Awards.

n addition to Setzer, the ensemble includes Eugene Drucker, 69, a violinist who is another founding member; the violist Lawrence Dutton, 67, joined in 1977, and the cellist Paul Watkins, 51, in 2013.

Drucker said discussions about moving on began several years ago, when he was asked by a financial adviser about his retirement plans.

“We’ve been playing together for a really long time,” he said in an interview. “It’s been a great, long ride for us. The literature that we’ve been privileged to play is just amazing.”

While the quartet will disband, its members plan to continue to come together to teach at the Emerson String Quartet Institute, an academic program founded at Stony Brook University in 2017.

Named for the essayist and poet Ralph Waldo Emerson, the group has collaborated with classical stars like Renée Fleming and has been widely praised for its interpretations of works by composers as varied as Shostakovich and Mendelssohn. Its repertory has encompassed hundreds of pieces.

In the upcoming season, its penultimate, the quartet is scheduled to perform “Penelope,” the final work by the composer André Previn, with Fleming at Carnegie Hall in January and at the Kennedy Center in Washington in February. The group will also embark on a six-city tour of Europe in March.