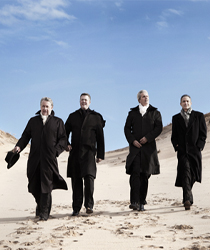 The Emerson String Quartet, widely acknowledged to be one of the most consistently exciting chamber ensembles of our time, will receive the Richard J. Bogomolny National Service Award—CMA’s highest honor—during CMA’s 2015 National Conference.  Founded at The Juilliard School in 1976, the ensemble won the Naumburg Award for Chamber Music the following year, launching what would be an outstanding performance and recording career. In 2004 the group became the first ensemble to receive Lincoln Center’s prestigious Avery Fisher Prize—an honor previously bestowed only on solo instrumentalists. Testifying to the Emerson’s recording artistry are its nine Grammys® (including two for Best Classical Album) and its three Gramophone Awards.

The quartet has undergone very few personnel changes in its 38-year history. The current violinists, Eugene Drucker and Philip Setzer, are founding members; violist Lawrence Dutton joined only a year later. In 2013, the current cellist, Paul Watkins, succeeded David Finckel, who had performed with the Emersons for 34 years.

The award the Emersons will receive—named for Richard J. Bogomolny, an influential and visionary chair of CMA’s board of directors—has been presented annually since 1980 to those who have made lasting, significant contributions to the field of chamber music. Previous recipients include Rudolf Serkin, Felix Galimir, Josef Gingold, Chick Corea, Dr. Billy Taylor, the Guarneri String Quartet, Ruth Felt, Judith Sherman, Marian McPartland, and the American Brass Quintet.

The award will be presented at the Awards Banquet, on Sunday evening, January 18, 2015.