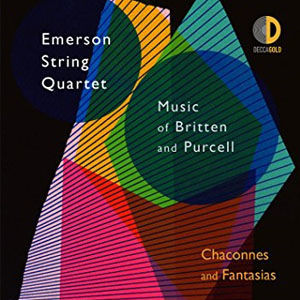 Now Available for Pre-Order via Amazon

“Now celebrating the ensemble’s 40th season, the silver-haired, suit-and-tie-clad veterans…proceeded to do what they do best: distill music down to its purest essence.”
— The Boston Globe

"The performances were everything we have come to expect from this superb ensemble:  technically resourceful, musically insightful, cohesive, full of character and always interesting."
— The New York Times

"Few string quartets have regularly displayed such individuality among members-- an ideal stance for coloring and differentiating the complex strands of the fugues."
— The Philadelphia Inquirer

The Emerson String Quartet celebrates its 40th season this year and presents a new recording, Chaconnes and Fantasias: Music of Britten and Purcell, which will be the first release on Universal Music Classics’ new US classical record label, Decca Gold, on April 21. Their US tour takes them from California to New York to Virginia this spring and summer, and on April 26 they will perform works from the new album and their extensive repertoire in celebration of the 40th anniversary at The Jerome L. Greene Performance Space at WQXR.

On this new album, the Emersons explore the close affinities of the music of Henry Purcell and Benjamin Britten, arguably two of Britain’s most well known composers. Included here are Britten’s String Quartet Nos. 2 and 3, and Purcell’s Chacony in G minor and Fantazias Nos. 6, 8, 10 and 11.

Eugene Drucker (violin) says of this album, “it’s hard to believe that the music on this CD spans almost three centuries, ranging from Purcell’s surprisingly pungent harmonies to Britten’s distinctive voice: pitched outside the mainstream of European modernism, experimental yet deeply rooted in his extensive knowledge of older music, drawing inspiration from and breathing new life into old forms.”

Britten paid homage to his great predecessor Purcell many times over as performer, arranger and composer – not least in his Second String Quartet, with its extended finale modeled on Purcell’s Chacony in G minor.

Purcell’s original Chacony was written for four-part strings – more a passacaglia than a chaconne, Purcell’s worldly influence shows in this work as he tackles a potentially restrictive form with melodic invention. The Emersons use Britten’s performing edition of this Chacony, which enhances the dramatic inflections of the work.

Britten’s Second String Quartet uses this Chacony as the basis of the finale and uses the traditional dotted rhythmic pattern of the Baroque chaconne – but, less traditionally, it consists of nine rather than eight bars. Even when Britten later varies the theme, sometimes almost beyond recognition, he sticks to this length.

The Emerson String Quartet has amassed an unparalleled list of achievements over four decades: more than thirty acclaimed recordings, nine Grammys® (including two for Best Classical Album), three Gramophone Awards, the Avery Fisher Prize, Musical America’s "Ensemble of the Year," four honorary doctorates and collaborations with many of the greatest artists of our time.

Formed in 1976 and based in New York City, the Quartet took its name from the American poet and philosopher Ralph Waldo Emerson. In January 2015, the Quartet received the Richard J. Bogomolny National Service Award, Chamber Music America’s highest honor, in recognition of its significant and lasting contribution to the chamber music field. In addition to the new album, this past fall Deutsche Grammophon reissued the Emersons recordings in a 52-CD box set.