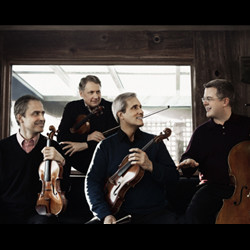 The Emerson String Quartet stands apart in the history of string quartets with over four decades of an unparalleled list of achievements: more than thirty acclaimed recordings, nine Grammys® (including two for Best Classical Album), three Gramophone Awards, the Avery Fisher Prize, Musical America’s "Ensemble of the Year", and collaborations with many of the greatest artists of our time. With a repertoire that spans three centuries of chamber music, the Emerson also looks towards the future by collaborating with today’s most esteemed composers and premiering new works, thus proving their commitment to keeping the art form of the string quartet alive and more relevant than ever.

The coming season reflects all aspects of the Emerson’s venerable artistry with high-profile projects, collaborations and tours.  In season 2018-2019, the Emerson continues its series at the Smithsonian Institution in Washington, DC for its 40th season, collaborates with pianist Shai Wosner in New York at Alice Tully Hall, and appears at University of Georgia as part of the Chamber Music Society of Lincoln Center's On Tour Series, Friends of Chamber Music in Denver and Vancouver, Library of Congress and Meany Center for the Performing Arts, among others.

Other North American highlights include subsequent performances at the Ravinia Festival, Segerstrom Center for the Arts and Stony Brook University of Shostakovich and The Black Monk: A Russian Fantasy, the new theatrical production co-created by the acclaimed theater director James Glossman and the Quartet’s violinist, Philip Setzer.  In a bold intersection of chamber music and theater starring David Strathairn and Sean Astin, with the Emerson String Quartet, witness the trials and redemption of Dmitri Shostakovich’s 50-year obsessive quest to create an opera based on Anton Chekhov’s mystical tale: The Black Monk.  Created from the minds of acclaimed writer-director, James Glossman, and Emerson String Quartet member, Philip Setzer,  Shostakovich and The Black Monk: A Russian Fantasy is a masterpiece about love, art, madness and freedom.  With the stroke of a pen, the Soviet regime undermined the career of one the most prominent composers of the 20th century.   Through music – including performances of Shostakovich’s String Quartet No. 14 and No. 8– the Emerson Quartet joins seven actors and weaves the tale of Shostakovich’s obsessive quest, trying over decades to retell Chekhov’s haunting and heroic story of a writer struggling for his sanity, only to be sidetracked again and again by the composer’s own struggle to survive as an artist amid the ever-changing imperatives of Stalin’s Soviet state.

"Christopher and Justin Swader’s almost gothic scenic design reminded the audience of the dark period of Russian history in which both Chekhov and Shostakovich worked, and the visuals presented on a screen at the back of the stage were primarily authentic photographs from the lives of the characters. As a multimedia production, Shostakovich and the Black Monk effectively combined ensemble theater with the best of chamber music." - Town Topics Princeton

Shostakovich and The Black Monk: A Russian Fantasy